It’ll definitely take me longer to write this recipe out for you than it did for me to whip up my latest batch of hummus in my high speed blender! Since I’ve become plant-based, I’ve made sure to have plenty of healthy snacks available, just in case I get the munchies, and to help me stay true to my ideals! So, I usually have lots of fresh fruits, frozen fruits (frozen blueberries make an amazing cold snack), raisins (that aren’t soaked in sunflower oil), and, well, hummus! I’ve bought hummus in bulk for years from Costco, but, upon inspection, it’s filled with oils and sometimes other ingredients I can’t pronounce.

So, I’ve started making my own, because it really is so easy, there’s a billion variations, and, it’s pretty cheap, too! I’ve started taking my hummus to parties and events, along with a big bowl of sliced and diced veggies, and it’s been a big hit! In fact, I’m starting to get a little bit known for it!

First off, I’m not picky on my chick peas or garbanzos. I’ve tried at least a dozen brands, and I’ve not seen that it makes any difference. So, now I buy canned garbanzos in bulk from Wal-Mart, which usually has a can for under $0.50 or at another local grocery store that is having a sale. I’ve also tried to take dried garbanzos and soak and cook, but I haven’t yet perfected that, and, it makes a simple tasks take hours, although I like the thrifty ideal!

And, while not going to go too deep into it right now, don’t throw away that “bean juice” or “aquafaba” that isn’t needed in the recipe. You can use it in my No-Oil Whole Wheat Bread recipe and host of other things, and it makes a great substitute for eggs in certain other recipes and such. Simply freeze a jar of it, and it’ll last forever. (In fact, one of my former plastic 32 oz. jars of tahini has been repurposed into the aquqfaba freezer jar!)

Hummus is also great for so many things, other than basic “dip” snacking. I’ll often use it as a “mayo” or spread for bread, sandwiches, on salads as a dressing, and more!

So, without further ado: 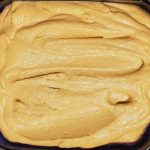 Lemon juice really gives a great flavor to hummus, so if you’re worried about it getting too runny, it’s better to decrease the amount of aquafaba you’re using than to decrease the lemon juice.  Starting out with very little liquid other than the lemon juice, and adding just enough aquafaba to make it blend is a good method! And, in my opinion, it’s almost impossible to have too much lemon juice! Get tahini at an international market and look for the jars that have as little English as possible on them. Look for “100% sesame seeds” and nothing else. Tahini, once initially stirred, should be a thick, runny liquid, not a paste.

The heaping tablespoons mentioned in my recipe just mean that I wouldn’t be stingy with the ingredients. I think you CAN overdo things like the chili powder, and even though I like garlic, 6-8 cloves is really too much! Other than that, season to your personal taste.

And then there’s Frank’s RedHot Seasoning Blend! I picked up a large jar of this one day at Costco on a close-out, and when I thought to try it in my hummus, I’ve never looked back. It really is perfect for hummus, giving it just a little zip that it needs, without making it “spicy.” You could also put a pinch of cayenne or increase the chili powder slightly, but Frank’s really does something nice to it!

Finally, this is a basic recipe. I almost never make my hummus exactly like the recipe, unless I’m taking it to a party! Lots of things can be added to bring originality and a new take, such as: bell peppers, olives (green, black, and kalamata all make it amazing), fresh parsley, fresh mint, fresh cilantro, jalapenos, banana peppers, green chilies, and more. For most of these extra ingredients, I’ll blend my hummus to completion, then add my extras, blending just briefly to break them up, without pulverizing! One extra note about bell peppers: green or red give some color, but peppers are largely water-based, so might make your hummus slightly more runny. You might decrease the aquafaba in your batch at the beginning, first! 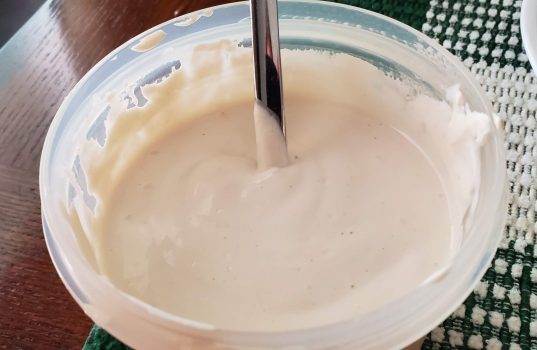 Seems I had a another hankering for some good ole country potatoes this morning, which works out, since I just bought a big bag of potatoes. (And, fun fact, as I look back, this is almost the exact sentence I used to introduce the recipe for my No-Oil Air Fryer Country Potatoes, originally, in September!) But, I wanted this to be great, so I couldn’t just make the potatoes; I had to make it, um, better!

I’d mentioned in my No-Oil Air Fryer Country Potatoes recipe that most plant-based sour creams are about the same. And they are, with a few variations. The Seven Secrets Cookbook (which seems to be cheaper right now than I’ve noticed it before…hint, hint) has a good one that has silken tofu and a bit of cashews in it. But, that wasn’t my favorite, and seems to get quite hard after a few days in the fridge.

So, with help from Angela Liddon at Oh She Glows (which, the childish side of me says, “Maybe she ought to get that checked…”), I present her recipe, in typical form, slightly modified by me to be better and more amazing (of course, in my opinion!) Or something like that. 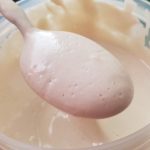 *Start with barely 3/4 cup water and see how it goes.  Don’t use a “generous” 3/4 cup.  If you need more liquid to make it properly blend, add it, just a little at a time, until you get a good blend going.  Remember, this cream will thicken in the refrigerator, and it’s best to chill before serving, as the blender can heat this up quickly! **After soaking cashews, they are a weird gray color.  Don’t worry.  The cream gets pretty white upon blending!

Angela’s original recipe calls for less lemon juice, and the use of apple cider vinegar.  I find that the extra lemon juice makes the cream more “soury” and that the apple cider vinegar adds a strange sweetness that seems to get even stronger over the life of the cream.  I don’t really want my sour cream to be sweet, so I’ve made these modifications, and find it pretty tasty, indeed.

And those country potatoes I wanted for breakfast? They were delicious! I added in diced bell peppers and yellow onions before I was done cooking, and then topped them with last week’s Plant-based Cheddar Cheese (shredded), and some salsa!

May your days be sour, and creamy! Or at least your potatoes!