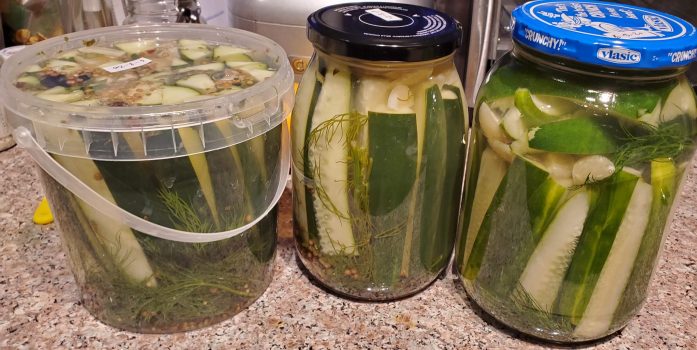 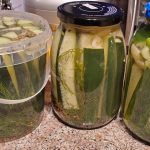 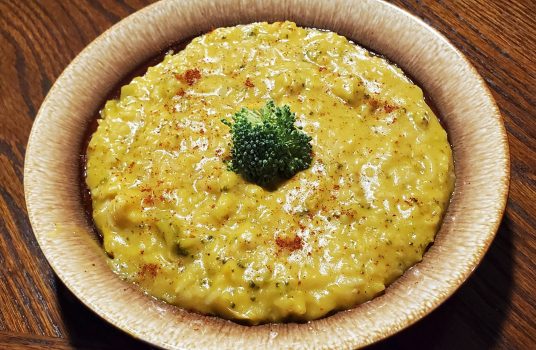 The winter days are waning, and it’s heating up, but there’s still just enough time for a little more comfort food – soup!

After last week’s Broccoli Chocolate Cake, I still had some broccoli left, and, I remembered that, when I was growing up, my mom used to make a delicious broccoli rice soup! Mom’s soup was undoubtedly made with dairy products, so I had to think outside the (dairy) barn!

The result was something I think is truly special, and uses some methods and skills I’ve been honing and learning about from other recipes. And, I’m pleased to say that this recipe is 100% original to the Plant-based Bear, and I’m pretty proud of it!

This soup is chock full of goodness, from whole grain rice, to carrots, onions, and, of course, broccoli!

First, I start off with a little coconut milk, some water and several cups of veggies, like carrots, onions, and some garlic, along with just a bit of seasoning to get things going!

Once most of the liquid has boiled off, I add a bit of vinegar, just for a bit of zest and to kind of “pickle” the ingredients. I add in a bit more water, a little more flavor, and two cups of cooked rice. Then, this soup base heads to the high-speed blender to turn creamy!

While blending, I heat up some more water, and add in everything else! And while I wait for everything to get nice and warm, I can whip up some cashew cream! 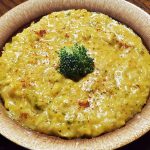 2 cups of precooked rice is more than enough for this whole recipe.  Extra rice can be added for desired consistency. Remember that cheese is often salty, so using a little extra chicken seasoning, seasoned salt, or salt-substitute than you normally might, will help add to the cheesiness! The full amount or additional lemon juice can give things a lovely tang that works well for a cheesy taste!  More lemon juice may increase the “sharpness” of the “cheese.” Water can be adjusted to suit the level of “soupy-ness” you require.  This soup will get thicker as it sits.  Use more water, if also using the cashew cream. Cashew cream is completely optional, but does take this soup from delicious, to decadent!  You can just add the cream to the soup pan and stir in, or swirl in some into each bowl of soup as you prepare to serve.  If storing leftovers, cashew cream is properly best stirred into the remaining soup!

I hope this original Plant-based Bear recipe will become one that you truly enjoy. Or, if you have tips or comments, please pop them below! May your remaining winter evenings be full of something creamy, cheesy, soupy, and delicious!

It’s been about a year since I started on the whole foods, plant-based lifestyle, and in that time, I haven’t had much cake. In fact, I don’t think I’ve had any. So, today, it seemed like a good day for some! I searched around online for some chocolate cake recipes that would have no oil, be plant-based, and sounded delicious. And, I finally stumbled across this one from Jeanette over at Vegan Envy. Jeanette’s passion for food, and essentially the same philosophy as me (a WFPB diet) makes her recipes a good fit, and I’ll be checking more of them out!

Jeanette has this easy and amazing sounding Healthy Aqua Faba Vegan Chocolate Birthday Cake: Fat-Free, Whole Wheat. It includes basic ingredients, and used zucchini to help with moisture, and at least pretend it’s healthy. Problem is, I don’t have any zucchini, or any kind of squash, and, I’m under a stay-at-home order in my area due to COVID-19. So, I wondered what else might do! And, I had a lot of broccoli that needed to be eaten before it went bad…

I’m no expert, but I reasoned that broccoli is the dryer, tougher, more flowery version of zucchini. When cooked, it’s a bit mushy, has a relatively light flavor, and seems to contain SOME moisture. So I set to work!

Jeanette’s recipe doesn’t print easily for some reason, as her pictures are so big (but I did appreciate knowing what things SHOULD look like), so I’ve included it below, just re-formatted.

All in all, an amazing cake, and it’s down-right tasty. I’m sure the sugar in the cake and frosting contribute, uh, slightly, but wow, it was really delicious. You can even see a little green broccoli at the bottom corner!

Thanks to Jeanette for this recipe. I think I’ll be using this again, next time I need a decadent cake! 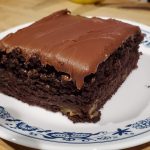 *Aquafaba is the liquid in a can of beans, for example chickpeas or cannelloni beans, or the cooking liquid from making your own beans. The aquafaba replaces the protein that eggs normally provide. It strengthens the walls of the bubbles, and makes the cake fluffier. Zucchini Substitution: Spaghetti Squash. (PBB: Or broccoli!) Non-Dairy Milk Options: Soy or homemade Almond or Pecan milk. Rectangle Option: 9″ x 13″ rectangle cake (not layered) – cook 5-10 min longer, until a toothpick inserted in the middle, to the bottom comes out clean. Serving Suggestions Birthday candles!! Party hats!! Family and Friends!! A scoop of non-dairy ice cream!